Embotics® vCommander® integrates with your SMTP server to send notifications to users, approvers, and customers. Refer to the documentation for configuration steps:

You can test the configuration by providing a recipient address and clicking Send. 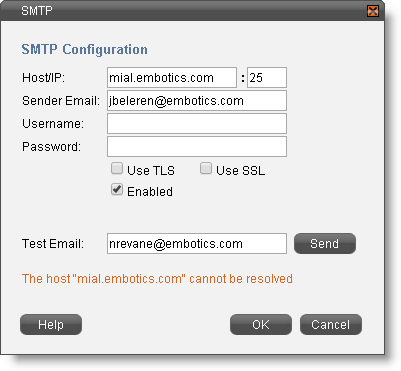 In many cases, the error message you receive upon test failure will make the problem very clear. In the example above, the problem is obviously that the host name used can’t be resolved.  However some situations are less obvious, so this article covers the most likely failures that are encountered.

As we’ve seen above, the error message is very clear when a host name can’t be resolved from the vCommander application server, but this is not the only scenario where DNS can impact the SMTP integration. A DNS record could also exist, but be pointing to an incorrect IP address, so the communications never actually reach the mail server. You can confirm whether or not this is the case by comparing the results of the commands:

If the name and IP returned from the first command match those returned by the second, your DNS records are probably valid. You may also get different results if you have multiple DNS servers capable of responding, so be sure to check that all records are valid on all servers if you suspect this may be the issue. Alternatively, you can use the Windows hosts file to override the DNS, or simply confirm and use the IP address of the SMTP server to exclude DNS.

By default, SMTP uses TCP port 25 but your mail server could be configured to run the SMTP service on any port. Whichever port is in use, you need to make sure it’s open between the vCommander application server and the SMTP server. To do so, you can use the open source Port Scanner or any similar tool. If the port is open, and matches the port used by the SMTP service, you know this is not the issue.

If the test succeeds, but your users are not receiving emails sent by vCommander, also make sure they check that any mail filtering has not blocked the messages or sorted them into junk mail folders.

If you are unable to resolve the issue, turn on debug logging for SMTP following the instructions in this article, and then perform the test one more time. Once it fails, send a diagnostics package to support@embotics.com for examination. Turn off the debug logging once you’ve sent the diagnostics.